Research of the physiology of senses and perception requires knowing when the stimulus causes a perceptual sensation in the experimental animal. In order to achieve this requirement, the animal should be trained to report its sensations through various experimental tasks. But animal training can constitute some problems – it takes rather long time and it does not always yield accurate reports. Thus, it is preferable to develop a method for studying the animal’s behavior that does not require any training.
Thus, I chose to study a reflexive behavior in the barn owl. This behavior includes reflexive eye movements and pupil dilation as a response to unexpected visual or auditory stimulus. The barn owl is a nocturnal predator. It survives thanks to its ability to detect small prey in dark and noisy environments. It has frontal eyes and stereo vision that use a strategy for information processing of the physical space resembling in many aspects strategies used by mammals and even humans (van der Willigen et al., 2002). However, in the barn owl’s natural habitat the light levels often fall below the threshold level at which it can see its prey. Then the barn owl uses its remarkable sense of hearing to dynamically locate the prey (Payne, 1971).  Thus, the specialization of the barn owl in spatial information processing by both senses, vision and audition, makes it an attractive animal model for studying visual-auditory integration and its influence on reflexive behavior.
Previous work that was done in this field showed that pupil dilation can be obtained in an awake, untrained and head-restrained barn owl in response to a sound stimulus. Moreover, it habituates when the sound is repeated and recovers when the frequency or location of the stimulus is changed (Bala and Takahashi, 2000). My research will focus on the effect of visual pop out stimuli, as well as the effect of visual-auditory stimuli, on the reflexive pupil dilation and eye movements.

The experimental animals that I use in my research are barn owls (tyto alba). All birds are hatched and raised in captivity and kept in large flying cages that contain perches and nesting boxes. In all of the conducted experiments the subjects were head-restrained and slightly anesthetized by using isoflurane (2%) and nitrous oxide in oxygen (4:5). When it is anesthetized, the bird is put inside a restrainer and its head is fixed to the frame of the restrainer. The restrainer is located at the center of a sound-attenuating booth plated with acoustic foam that is used to suppress echoes. While the bird is kept inside the booth, the isoflurane is removed and the bird is maintained on a fixed mixture of nitrous oxide and oxygen(4:5) (Netser et al., 2010).
For pupil dilation and eye movement measurements I opened one of the bird’s eyes by attaching miniature clips to the small feathers on the eyelids. The clips are gently pulled by strings in order to open the eyelid. This procedure does not prevent the blinking of the nictitating membrane that enables spontaneous moisturizing of the eye.

For video recording of the change in pupil size I used a Point Grey analog video camera that uses IEEE-1394 interface, which is also called FireWire. Around the lens I placed an infra-red LED ring. Because it is rather difficult to distinguish between the barn owl’s pupil and iris, I project the infra-red light into the bird’s eye and get its reflection from the retina. Since the barn owl’s photoreceptors, like those of humans, are not sensitive to infra-red light, the projection of infra-red light on the owl’s eye is not noticeable by it and thus does not influence the pupil dilation or the eye movements.
The acquired videos during the trials are stored on the computer and are processed offline through MATLAB software.

An automatic tracking software was developed by me and is used to track the pupil during the whole acquired movie (see preliminary results). The algorithm finds automatically the region of interest (ROI) that contains the pupil in the first frame. This is done according to intensity differences between the pupil and its surrounding. My next step is to convert the ROI from a cartesian representation into polar representation. In this polar image I draw a curve that represents the borders of the pupil. I identify these borders using an intensity threshold. Then I apply filters to smooth the curve. In case there are some artifacts, such as feathers that enter the ROI, that distort the curve that was drawn previously, I apply a threshold to this curve and this way I get rid of the artifacts. Afterwards I apply a polynomial fitting to the smoothed curve and then I convert this polynomial from polar representation back into cartesian representation. Next I fit an ellipse to the curve that I got in the cartesian image. It is necessary to fit a geometrical structure to the curve because this way we can calculate all its parameters and learn about the change in pupil size.

The method that I will be using includes a tiny gold plated neodymium magnet that is implanted in the bird’s eye, under the conjunctiva and a Honeywell HMC1512 magnetic displacement sensor that is mounted on the bird’s skull. This is a single surgical procedure. When the eye moves, the magnet moves with it and the sensor tracks its position. A single sensor chip can reliably track a single dimension of eye movement. Thus, I will start with one chip to track the horizontal dimension. Another optional method for eye movement tracking is to use three reflectors that are glued to the cornea and reflect infra-red light. A video camera will record their movement over time during the trials and this movement will be analyzed by tracking software, whose basic principle is similar to the one described in the previous section.

Bimodal oddball paradigm. Oddball paradigms use a long sequence of stimuli. This sequence contains common stimuli, which are the distractors, and rare stimuli, which are the targets and are hidden within the common stimuli. The bimodal oddball paradigm is commonly used for estimation of human perception in healthy and diseased subjects. It was found that humans find the stimulus that is rarely presented as the salient one and are more attentive to it (Brown et al., 2006). The bimodal oddball paradigm I plan to use in my experiments will contain presentation of two different modalities – visual modality and auditory modality. I will use it in order to investigate the integration of the information, which is received from these two modalities, in the brain, through its influence on attention. My experiment will include a long sequence of common stimuli, which will be individual visual or auditory stimuli, and a rare stimulus that is a combination of both stimuli mentioned above, imbedded inside the common stimuli.  Similarly to the work presented by Netser (Netser et al., 2011), where he showed that in auditory adaptation experiments a reflexive eye reaction was observed when a new, unpredicted sound was presented to the owl and “surprised” it, I expect to see in my experiments similar reflexive reaction to the rarely presented stimulus, i.e. to the combined visual-auditory stimulus. Also, I plan to examine whether the bimodal stimulus is more salient than a unimodal one, e.g. visual or auditory stimulus alone, whose location rarely varies. A unimodal experiment is illustrated in Fig. 2a and the bimodal experiment I will be conducting is illustrated in Fig. 2b.

Bala A.D. S. and Takahashi T. T., Pupillary dilation response as an indicator of auditory discrimination in the barn owl.  Journal of Comparative Physiology A, Volume 186, Issue 5, Pages 425-434, May 2000. 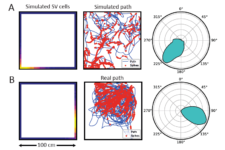 09/02/2017The representation of space in the hippocampal formation has been studied extensively over the past four decades, culminating in the 2014 Nobel Prize in Physiology or Medicine. However, an important question remained unresolved: Is the role of this brain structure in spatial processing restricted to mammals, or can we find its origins in other classes
Read More 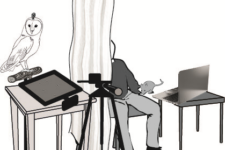 23/12/2015Visual Search: Behavioral Experiments Animals actively scan the environment to collect useful bits of information. This process, known as visual search, is highly studied in humans and animals. What attracts the visual gaze and how barn owls search for interesting stimuli are the main questions asked in this project. We combine kinematic measurements of head movements
Read More

23/12/2015Visual Search: Physiological Experiments The saliency of visual objects is based on the center to background contrast. Particularly objects differing in one feature from the background may be perceived as more salient. It is not clear to what extent this so called ‘‘pop-out’’ effect observed in humans and primates governs saliency perception in non-primates as
Read More

20/12/2002Auditory map development The neural mechanisms that generate internal representations of the auditory space have been extensively studied, indicating the importance of precise integration, in time and space, of information from the two ears and from different frequency bands. However, the important question of how the specific neural connections are formed remained unsolved. Are these
Read More

26/12/2001Visual-auditory processing Visual and auditory information is integrated in the brain to facilitate the perception of events that can be both seen and heard. The barn owl, with its excellent visual and auditory capabilities, provides an interesting case study for the mechanisms of visual auditory integration. Moreover, it was shown in barn owls that interactions
Read More

26/12/2000Stimulus Specific adaptation and target selection Stimulus specific adaptation (SSA) is a phenomenon at the neural level, proposed as the neural correlate of novelty detection. In SSA a rare stimulus elicits a stronger response than a frequent stimulus. Novelty is an important component of stimulus saliency and has been linked with the ability of animals
Read More